The museum’s cultural history areas of responsibility cover a broad area, from marine traffic off the west coast of Jutland through the Danish fishing industry to the offshore exploitation of natural resources in the North Sea.

Chronologically, this covers a period from the 1500s to today, with a wide range of maritime themes, which is reflected in the multiplicity of our stories.

At the museum, for example, you can learn about the heyday and decline of the west Jutland sailing ships, about the many kinds of commercial fishery and the Danish struggle to become self-sufficient in oil and gas from beneath the seabed.
The common theme of these cultural historic narratives is mankind’s encountering, working with and struggling against the sea. This encounter has spawned business, adventure, tragedies and poetry – and it is these narratives that we want to share.

Below is a time line which shows a brief overview of the museum’s areas of responsibility. You can see, for instance, some details about the shipping magnate A.P. Møller’s work to ensure a monopoly for the right to drill for oil and gas, Martin Spangsberg’s expeditions with Vitus Bering and the 1960s, the golden age of the fishing industry in Esbjerg.

As a result of the decline of the market town of Ribe, new marine trading ports grow up around Rømø, Fanø, Hjerting, Ho and Varde. These form the historical foundation for maritime traffic in west Jutland, which we can still perceive today.

Martin Spangsberg, from Jerne, near Esbjerg, is recruited to serve in the navy of Peter the Great. As the right hand man of Vitus Bering, he takes part in expeditions to the farthest parts of the world and helps to discover the Bering Strait amongst other things.

The king of Denmark gives royal assent to the foundation of Esbjerg Harbour on 24 April 1868.
The need for a west-facing harbour was great, following the defeat in 1864, which among other things led to the loss of Altona Harbour, one of the most important ports in the kingdom. Esbjerg harbour was actually intended as an export harbour for agriculture, but in the course of the 1900s developed into Denmark’s largest fishing port.

The occupation of Denmark has a critical significance for both the transport and fisheries harbour; but whereas fishing experiences a boost, the conditions of war force exports into a decline.

The golden age of fishing in Esbjerg, where both industrial and fishing for human consumption are in constant growth.
At its peak, the fishing harbour was filled with up to 600 cutters. 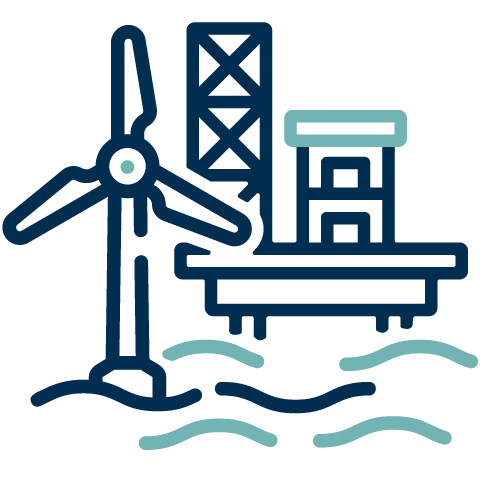 A.P. Møller is granted a concession by the Danish government to explore and exploit oil and gas from the Danish underground. In 1972, the first Danish oilfield, the Dan Field, enters production. Thus the Danish oil industry was born.

Horns Rev 1, the world’s first large-scale offshore wind farm is established off Blåvands Huk.
Together, the 80 2.0 MW turbines produce a total of 160 MW. From then on, wind farms would use Esbjerg as both a home base and a port of shipment.

The production of fish meal is stopped and the remains of the fishing industry are removed from Esbjerg to be relocated to ports in the north, such as Hanstholm and Hirtshals.

The reconstruction project of the natural gas field, Tyra, is started at a cost of DKK 21 billion. Esbjerg harbour aims to become a leading example of green transition, which brings a sharpened focus on new, sustainable technologies and businesses.